Share of Mortgage Loans in Forbearance Remains Flat at 0.70% in December

Share of Mortgage Loans in Forbearance Remains Flat at 0.70% in December

The Mortgage Bankers Association’s (MBA) monthly Loan Monitoring Survey revealed that the total number of loans now in forbearance remained flat relative to the prior month at 0.70% as of December 31, 2022. According to MBA’s estimate, 350,000 homeowners are in forbearance plans.

“For three consecutive months, the forbearance rate has remained flat — an indicator that we may have reached a floor on further improvements,” said Marina Walsh, CMB, MBA’s Vice President of Industry Analysis. “New forbearance requests and re-entries continue to trickle in at about the same pace as forbearance exits. The overall performance of servicing portfolios was also flat compared to the previous month, but there was some deterioration in the performance of Ginnie Mae loans.”

Added Walsh, “Forbearance remains an option for struggling homeowners and its usage may continue, especially if unemployment increases as expected. MBA is forecasting for the unemployment rate to reach 5.2 percent in the second half of 2023, up from its current level of 3.5 percent.” 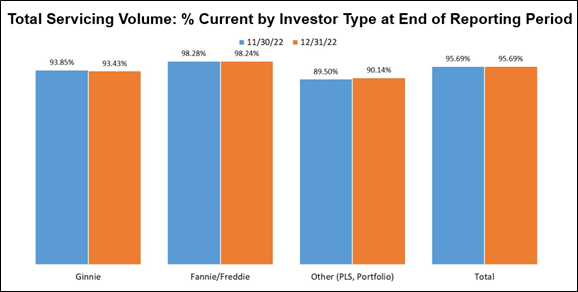 MBA’s monthly Loan Monitoring Survey (replaced MBA’s Weekly Forbearance and Call Volume Survey in November 2021) covers the period from December 1 through December 31, 2022, and represents 66% of the first-mortgage servicing market (33.1 million loans). To subscribe to the full report, go to www.mba.org/loanmonitoring.