WASHINGTON, Jan. 30, 2019 /PRNewswire/ — Pending home sales declined as a whole in December, but for the second straight month the Western region experienced a slight increase, according to the National Association of Realtors®.

The Pending Home Sales Index,* www.nar.realtor/pending-home-sales, a forward-looking indicator based on contract signings, decreased 2.2 percent to 99.0 in December, down from 101.2 in November. Additionally, year-over-year contract signings fell 9.8 percent, making this the twelfth straight month of annual decreases.

All four major regions experienced a decline compared to one year ago, with the South sustaining the largest decrease.

Yun says so far, the partial government shutdown has not caused any obvious damage to home sales. “Seventy-five percent of Realtors® reported that they haven’t yet felt the impact of the government closure. However, if another government shutdown takes place, it will lead to fewer homes sold,” he said.

According to Yun, as the government reopens, more mortgage options will come available for consumers. “Some home transactions were delayed, but we now expect those sales to go forward,” he said.

Still, there is growth in certain pockets. Yun cited year-over-year increases in active listings from data at realtor.com® to illustrate a potential rise in inventory. Denver–Aurora–Lakewood, Colo., Seattle–Tacoma–Bellevue, Wash., San Francisco–Oakland–Hayward, Calif., San Diego–Carlsbad, Calif., and Portland–Vancouver–Hillsboro, Ore.-Wash. saw the largest increase in active listings in December compared to a year ago.

Yun says despite the low home sales in December, he is confident that the housing market will see improvement in 2019. “The longer-term growth potential is high. The Federal Reserve announced a change in its stance on monetary policy. Rather than four rate hikes, there will likely be only one increase or even no increase at all. 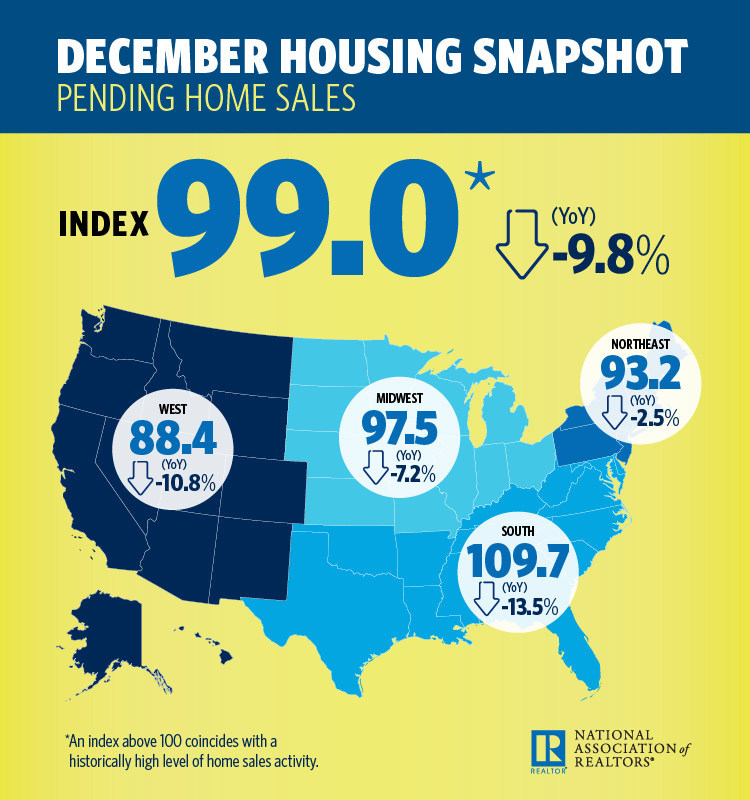 This has already spurred a noticeable fall in the 30-year, fixed-rate for mortgages. As a result, the forecast for home transactions has greatly improved,” Yun said.

Pending home sales in the South fell 5 percent to an index of 109.7 in December, which is 13.5 percent lower than a year ago. The index in the West increased 1.7 percent in December to 88.4 and fell 10.8 percent below a year ago.

The National Association of Realtors® is America’s largest trade association, representing more than 1.3 million members involved in all aspects of the residential and commercial real estate industries.

*The Pending Home Sales Index is a leading indicator for the housing sector, based on pending sales of existing homes. A sale is listed as pending when the contract has been signed but the transaction has not closed, though the sale usually is finalized within one or two months of signing.

An index of 100 is equal to the average level of contract activity during 2001, which was the first year to be examined. By coincidence, the volume of existing-home sales in 2001 fell within the range of 5.0 to 5.5 million, which is considered normal for the current U.S. population.

NOTE: NAR’s December Housing Minute video will be released on January 31, Existing-Home Sales for January will be reported February 21, and the next Pending Home Sales Index will be February 27; all release times are 10:00 a.m. ET.

Information about NAR is available at www.nar.realtor. This and other news releases are posted in the newsroom under the “About NAR” tab. Statistical data in this release, as well as other tables and surveys, are posted in the “Research and Statistics” tab.