One in six Gen Xers purchased a multi-generational home, overtaking younger boomers as the generation most likely to do so; with 52 percent of those Gen X buyers indicating that they did so because their adult children have either moved back or never left home.

This is according to the National Association of Realtors®’ 2019 Home Buyer and Seller Generational Trends study, which evaluates the generational differences1 of recent homebuyers and sellers. The report also found that older millennials who bought a multi-generational home, at 9 percent, were most likely to do so in order to take care of aging parents (33 percent), or to spend more time with those parents (30 percent).

“The high cost of rent and lack of affordable housing inventory is sending adult children back to their parents’ homes either out of necessity or an attempt to save money,” says Lawrence Yun, NAR chief economist. “While these multi-generational homes may not be what a majority of Americans expect out of homeownership, this method allows younger potential buyers the opportunity to gain their financial footing and transition into homeownership. In fact, younger millennials are the most likely to move directly out of their parents’ homes into homeownership, circumventing renting altogether.”

Millennials as a whole accounted for 37 percent of all buyers, making them the most active generation of buyers for the sixth consecutive year. 2019 is the first year the report separated younger and older millennials, accounting for 11 and 26 percent of buyers respectively. This separation was deemed necessary as younger millennials now account for a larger buying share than the silent generation (7 percent). Gen X buyers were the second largest group of buyers (24 percent), followed by younger boomers (18 percent) and older boomers (14 percent). 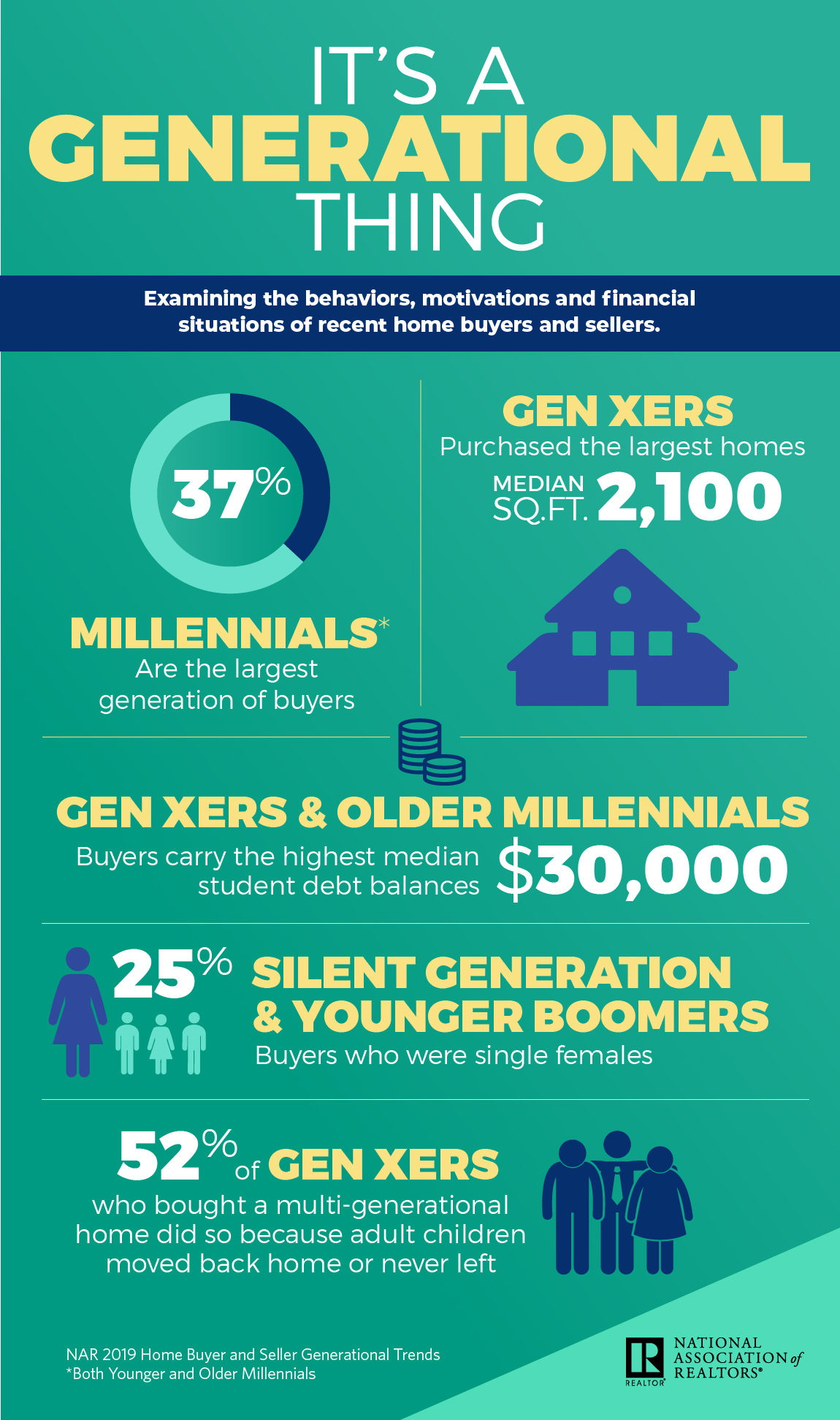 Yun says this is to be expected as millennials continue to age and advance through various stages of their lives and careers. “Older millennials are now entering the prime earning stages of their careers, and the size and costs of homes they purchase reflect this. Their choices are falling more in line with their Gen X and boomer counterparts.”

Younger millennials, meanwhile, are purchasing the least expensive homes and smallest homes ($177,000 and 1,600 square feet), meaning they face the greatest challenge in finding affordable inventory. They also report a median household income of $71,200.

Downsizing to a smaller home is not currently common among any of the generations. Sellers over the age of 54 only downsize by a median of 100 to 200 square feet. Gen Xers and boomers who may have been interested in downsizing could have been hindered by a lack of smaller inventory; or may have been impeded by the increase in multi-generational living these generations are reporting to accommodate the needs of adult children and aging parents.

Younger millennials were the most likely to say saving for a down payment was the most difficult task in the home process, 26 percent. Among them, student loan debt delayed their home purchase (61 percent); however, they indicated that this particular debt only delayed them a median of two years − the shortest delay of all generations. “These buyers are the most likely to receive some or all of their down payment as a gift from family or friends, usually their parents,” says Yun. “This could explain why their debt is not holding them back from homeownership as long as other generations, who are less likely to receive down payment assistance.”

While the majority of buyers in all age groups are married couples, single buyers and unmarried couples continue to make a mark on the real estate market. Single females accounted for 25 percent of all younger boomers and silent generation buyers. “Many of these buyers are entering the market after a divorce, which is the case for younger boomers, or the death of a spouse in the case of those in the silent generation,” says Yun.

A majority of buyers and sellers work with a real estate agent, regardless of age.

Gen Xers were the largest group of sellers, accounting for one-quarter of all sellers. They were also most likely to have wanted to sell earlier but could not because their home was worth less than their mortgage; 15 percent reported they were in this situation. Ninety-two percent of all sellers used an agent during their home selling process, with older millennials and Gen Xers most likely to have used a full-service agent who offered a broad range of services and managed most aspects of the sale.

“Consumers of all ages understand that working with a Realtor® is the advantage they need to compete in this fast-moving, constantly evolving real estate market,” said NAR President John Smaby, a second-generation Realtor® from Edina, Minnesota and broker at Edina Realty. “Buying a home is an exciting, complicated and sometimes daunting process, and Realtors® have the knowledge and expertise to guide buyers and sellers through this experience.”

NAR mailed a 129-question survey in July 2018 using a random sample weighted to be representative of sales on a geographic basis to 155,250 recent homebuyers. Respondents had the option to fill out the survey via hard copy or online; the online survey was available in English and Spanish. A total of 7,191 responses were received from primary residence buyers. After accounting for undeliverable questionnaires, the survey had an adjusted response rate of 5.6 percent. The sample at the 95 percent confidence level has a confidence interval of plus-or-minus 1.10 percent.

The recent homebuyers had to have purchased a home between July 2017 and June 2018. All information is characteristic of the 12-month period ending in June 2018 with the exception of income data, which are for 2017.

The National Association of Realtors® is America’s largest trade association, representing more than 1.3 million members involved in all aspects of the residential and commercial real estate industries.